The US Chamber of Commerce and twelve other organizations urged the European Union not to pass regulations that may bar Amazon, Google, Microsoft and other non-EU cloud providers from selling products in the European market.

The reason for the group’s concerns is a draft proposal from ENISA that suggests introducing an EU certification program for the cybersecurity of cloud services, which would influence how EU governments and businesses choose a cloud provider for their operations.

All cloud service user data would have to be stored and processed in the EU. The EU’s rules would take precedence over those of non-EU nations. “The CSP’s registered head office and global headquarters shall be established in a member state of the EU”, the document read.

In their statement, the US Chamber of Commerce and industry associations argued that the EU should refrain from adopting requirements of a political nature, which would exclude legitimate cloud vendors and do little to strengthen cybersecurity measures.

“These requirements are seemingly designed to ensure that non-EU suppliers cannot access the EU market on an equal footing, thereby preventing European industries and governments from fully benefiting from the offerings of these global suppliers”, the statement reads.

Tip: EU plans massive industry subsidy fund to compete with the US 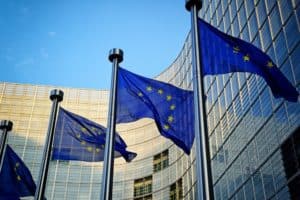