Here you will find all the articles with the tag: Version 1809. 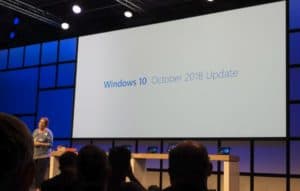 Microsoft announces that the Windows 10 October 2018 Update is now fully available. The update is therefore in its final roll-out phase and will be rolled out automatically, but in phases, to compatible systems. We are now starting with the phased roll-out to users via Windows Update. Initially we o... Read more

Microsoft has fixed a bug in the currently delayed Windows 10 October 2018 Update. This was in earlier versions of the operating system and gave apps potentially undesirable access to user data. This is a bug in the Universal Windows Platform. The bug in the Windows broadFileSystemAccess API could g... Read more