Two tech giants have concluded that their existing cooperation tastes like more. Therefore, they have now announced that they will deepen their relationship and work more closely together. It will become a lot easier to integrate their platforms. We can almost speak of a tech marriage. It concerns the cloud services of Amazon Web Services (AWS) and the Salesforce Lightning platform.

Earlier today, AWS and Salesforce announced that it will become be possible to integrate certain cloud services from AWS into applications that can be built with low-code on the Salesforce platform. When developing applications within the Salesforce Lightning Platform, companies can use the Amazon S3 storage service or a relational database powered by Amazon RDS.

Normally, this requires a developer or integration platform to make this connection. Salesforce now makes it possible to add the AWS services with a few clicks to a low-code application on the Salesforce Lightning platform. This greatly increases the possibilities and impact of the types of applications you can develop with Lightning.

Last year we wrote about Salesforce Service Cloud Voice. This telephony solution from Salesforce relies heavily on AWS technology. It makes intensive use of the Amazon Connect telephony service, but also of various AI tools from AWS to convert speech to text and also to convert text to speech again. The end customer can make a fully automated phone call without having to speak to a real person. In addition, Service Cloud Voice is ideal for companies with call centres to monitor how calls are received, whether there are any complaints, what the sentiment is, etc.

With Salesforce Service Cloud Voice, Salesforce has really taken the capabilities of Sales and Service teams to the next level by allowing real-time analysis of what is being said in a call. At the time, we asked if video would be part of this. There was an awkward silence at the time – they were looking into it, but nothing concrete.

That has changed with the new series of announcements. Salesforce has announced that it is going to add video to its Sales and Service portfolio. Video calls will be possible in the near future. For this, Salesforce will use the Chime technology from AWS. With Chime, you can make video calls, just like you can with Teams, Zoom and WebEx. Salesforce and AWS see this as the next step in making Salesforce’s business applications even better.

Doesn’t Slack fit into this story?

During the presentation of AWS and Salesforce, we also asked about the status of Slack, because communication in text, voice and video is basically the basis of Slack. Salesforce is planning to acquire Slack. So we asked Salesforce why they chose Chime and not Slack?

Salesforce said that they do not want to say too much about Slack at this point, because the acquisition has not yet been finalised and is still awaiting approval. They did point out that Slack’s video calling capabilities use Amazon Chime. AWS has decided not to compete with Teams, Zoom, WebEx and the many others. Instead, they have made a so-called software development kit (SDK) available for Chime, so that anyone can build a decent video communication service into their own applications. Slack, in turn, has taken advantage of this. Salesforce will now also integrate Chime into its products.

What we find remarkable is that Salesforce goes a lot further with these announcements than it did last year. Last year, Service Cloud Voice was still clearly a kind of test. It was also emphasised that Amazon Connect was not compulsory; other players in the telephony market could also take over the role of Amazon Connect at a later stage. After all, in the business world, the call services of Cisco and Avaya are also very popular.

Now Salesforce is choosing to go a little more all-in on AWS. The integration with Amazon RDS and S3 for low-code development, but also the integration of Chime into their Sales and Service Cloud solutions. In addition, Salesforce wants to offer the possibility of using the AI capabilities of AWS in addition to Einstein. It will become dependable on AWS technology.

The question is a bit whether this has created a kind of big-tech marriage? Or will Salesforce be announcing more of these partnerships in the coming year? Will Salesforce also be actively collaborating with Google Cloud or Microsoft Azure? We will keep an eye on that. 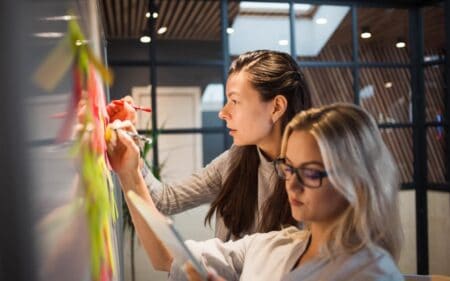