Last Wednesday there was a striking accident in an Amazon warehouse. A robot pierced a can with bear spray, filling an entire floor of the warehouse with gases. Dozens of employees are currently in hospital, including one in critical condition.

The accident took place in a warehouse in Robbinsville Township, which is located in New Jersey. Bear spray is meant for exactly what the name already hints at: bears. It allows hikers to chase away aggressive bears, or bears that simply get too close. Some of the gases are bad for people, so when a robot pierced the van, the warehouse filled up with harmful gases.

Amazon employees were evacuated immediately after the accident, but dozens suffered from painful and irritated airways and eyes. Twenty-four of the employees have been taken to hospital, one of whom is in critical condition in intensive care. A further 30 people were treated on the spot by the emergency services.

Amazon states in a statement that the accident was the result of an automated machine. What that means remains to be seen, but probably something went wrong with a robot arm or one of the conveyor belts in the warehouse. But that is not certain, because Amazon did not want to go into this.

According to Bear Smart, an organization that tries to stimulate bear awareness, the bear spray is not lethal and the gases only cause temporary discomfort to the eyes and skin. Permanent damage is not in line with expectations, neither for humans nor for animals.

Incidentally, this is certainly not the first time that Amazon has come into question about its working conditions. In recent months, there have been repeated protests from employees about the conditions in which they have to work. 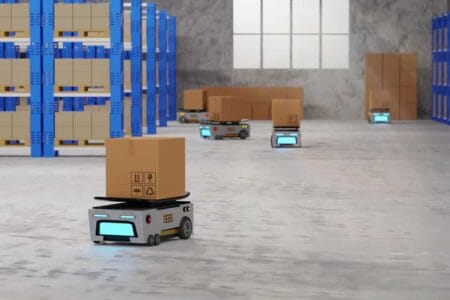 AMR: the autonomous robot in the warehouse alongside the employee