Huawei has had its mobile and 5G business hurt by US sanctions. But there is one area of its business that has remained relatively undamaged by the US: its PC division. It’s not surprising, then, that the company just introduced its first desktop PC beyond mainland China.

The new PC, named the Huawei MateStation S, is fairly humdrum as far as its specifications and performance are concerned. The unit uses a six-core Ryzen 5 4600G processor. The specs don’t list a separate GPU. Instead, the machine utilizes the integrated graphics of the AMD Radeon RX Vega 7 processor.

The desktop form factor allows for extensive possibilities to upgrade. There is room for two M.2 PCIe drives and two DDR4 SO-DIMM sticks. These pair with a single 256GB drive and 8GB of DDR4 3200MHz memory.

The unit measures 9cm at its widest part, and is 29cm tall.

As you might expect from a 5G powerhouse like Huawei, the MateStation S foregrounds connectivity. It has built-in 802.11ac dual-band Wi-Fi and Bluetooth 5.0, as well as Ethernet. Peripheral lovers will be happy. There are four USB-A slots (two USB 2.0, and two high-speed USB 3.2) on the rear of the machine. There is also a single USB-C and USB-A 3.2 port situated on the front.

Display output goes through a single HDMI port. There is also a VGA interface included for older displays. The PC also sports an unspecified serial port. This could be because the unit may also find applications in industrial environments. This mystery port looks like a standard 9-pin RS-232 or RS-422 port.

Unlike other vendors, Huawei has included a monitor. It offer 23.8 inches of screen with a 90 per cent screen-to-body ratio.

There’s also an optional smart keyboard, which includes a fingerprint reader. And naturally, there is support for Huawei Share. This feature allows users to upload files and photos to a computer by “tapping” their phone against an NFC reader. 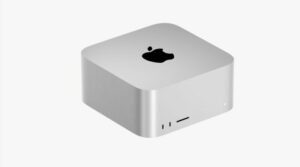