Samsung unveiled four new displays that will be demonstrated at this week’s Consumer Electronics Show (CES 2023) in Las Vegas.

First, there’s the Smart Monitor M8, a 27-inch computer monitor with a 4K resolution (3840×2160). A height-adjustable stand lets users tilt the display 90 degrees vertically. Displays with vertical modes can be beneficial for users that frequently read and scroll through documents.

Second, there’s the 27-inch ViewFinity S9, a model aimed at creative professionals with a resolution of 5120×2880 and optimization to reduce glare and reflections.

Samsung said the display has support for DCI-P3, which sharpens visuals. Users can leverage the Color Calibration Engine tool to change several display settings through a mobile app.

The OLED G9 is a 49-inch model with a resolution of 3840×2160 and a 240Hz refresh rate. Although it has the same quantum dots as the Neo G9, this model does not feature mini-LED backlights. Samsung opted for OLED instead, with built-in support for popular video game streaming services like Nvidia’s GeForce Now platform. 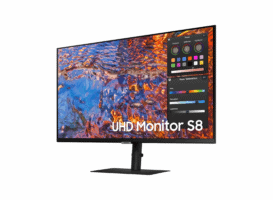