Samsung launched a new SSD for enterprise, based on SAS-4 specification. The new PM1653 was built using Samsung’s 6th generation V-NAND and will be provided on a range of storage capacities, starting from 800GB to 30.72TB.

The new SSD also supports a random read speed of 800,000 IOPS and a sequential read speed of 4,300MB/s, according to the statement by Samsung. PM1653 will also continue to support the previous generations of the SAS interface to allow customers to run their servers flexibly.

This product comes with a dual-port design, where one port will keep the server going even if one fails. Samsung said that it will collaborate with Broadcom (which provides host bus adapter cards) to give customers upgrades on the server storage system to SAS-4.

Jas Tremblay, the general manager at Broadcom’s data center solutions group, said that the combination of PM1653 SSD and Broadcom’s next-gen SAS RAID products will deliver up to 5 times RAID 5 performance, which is crucial to meet the strong demands of a 24G ecosystem.

Last month, Samsung announced its 512GB DDR5 memory module, which has a 7,200Mbps data transfer rate and has now begun sampling the PM1653 with some customers and will probably start mass production sometime in the second half of the year.

Kwangil Park, the senior VP of the Memory Product Planning Team at the company said that it has been the leading provider of SAS storage.

He touted its history of advanced and reliable enterprise solutions and accreditation by the U.S. National Institute of Standard and Technology. With a pedigree like that, Samsung is not going to have trouble pushing this product. 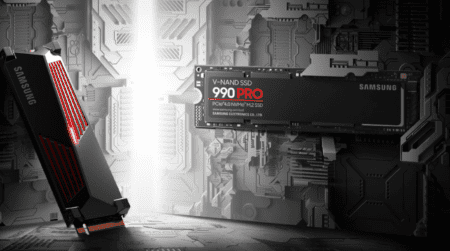