Companies sometimes manage to bring an excellent product to market, but then fail to take the right steps forward. Microsoft suffers from this with Microsoft Teams. Many companies have been waiting for that single feature for years now.

Microsoft Teams in itself is a very good tool, with which you can easily collaborate with colleagues. This can be done via chat (text messages), but also by making audio and video calls and even sharing your screen. Due to the coronavirus, tools such as Microsoft Teams have more or less exploded in usage. Both Microsoft Teams, Cisco WebEx Teams and Slack have all experienced massive growth in the number of users. There are also video services like Zoom that are used much more.

As a result of this increase in use, there is also a higher demand for new features, or feature requests that have been on the shelf for years that become even more necessary. We have received emails from users who want to express their frustration about the lack of certain features. On news articles about Microsoft Teams, we get a lot of response, especially articles with new features that are less urgent, such as adding more participants to the screen in a video conference.

The feature that seems to be most in demand among freelancers and companies with multiple clients, is to be able to login multiple times into Microsoft Teams. That you can switch between the different Tenants, without having to log out and log in. There are many marketing, PR and HR professionals who work for multiple companies and who are expected to participate in the Microsoft Teams environment of their clients. However, you can only be logged in once to Microsoft Teams on your PC, so these users often have to change accounts to be able to speak to everyone. As a result, the clients have to wait longer for an answer. Customer satisfaction suffers as a result, according to one of our readers.

“23.299 votes to realise this feature, but the feature is not coming soon”

The short summary is that Microsoft has been working on this feature for 3,5 years now, and it is still not available. The frustration of users is starting to grow, and Microsoft still doesn’t have a release date. The original feature request has received 23,299 votes.

On a smartphone, it is already possible to login to multiple Teams accounts. That’s a minor solution to the problem because it just doesn’t work as ideally as on a computer, especially for companies that have many clients where they need to communicate with several people.

However, this also raises the question of why the desktop application of Teams does not have this function. At first, we thought it might have to do with the complexity of Microsoft Azure Active Directory, which is a complex product for user management and authentication. That could be a bottleneck, but given that it already works on smartphones, that is not the case.

Microsoft just doesn’t seem to have their priorities in order. That’s our conclusion after doing a web search. The desired feature has been requiested often enough (1, 2, 3, 4, 5). Recently, the feature request was even broadened by a request to allow personal and business accounts to login into Teams at the same time. Now Microsoft Teams also wants to appeal to a wider audience. The most important request for this feature dates back from January 2017, three months after the introduction of Microsoft Teams, when the first user already asked for this functionality.

From the start of the topic until today, Microsoft has posted several official responses to this feature request:

Considering the fact that the feature has been working well on all mobile versions since December, it should mean that it is easy to extend it to the web and desktop versions of Teams. However, based on the updates provided by Microsoft, it is difficult to estimate when this feature will become available. It could be within a few months, but it could also take another couple of years. People who read the update in March 2017 probably expected the feature to be available by now.

With this blog, we hope to have adequately expressed the frustrations of our readers and maybe bring the feature request to Microsoft’s attention a bit more.

If this is one of your most important requirements for a collaboration tool, then Slack and Cisco WebEx Teams are the better solutions at this moment, they do support this feature. The only problem is that you usually don’t decide which solution your customer will use. 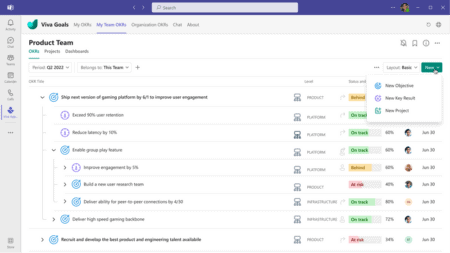