Waiting times on orders for new routers are going off the rails. Current shortages in chip production are holding up deliveries of the devices. Especially for internet providers this can become a huge problem.

The order times have risen to as much as 60 weeks, sources tell Bloomberg. Due to the lack of new routers, internet providers have difficulty delivering enough routers for new customers, which threatens to cause them to lose subscribers.

Order a year in advance

Karsten Gewecke, head of the European branch of network equipment manufacturer Zyxel, says that Zyxel now is forced to ask its customers to make orders a year in advance. This has everything to do with the long waiting time for components such as the Broadcom chips incorporated in the network equipment. Zyxel supplies modems and routers for various telecom providers in the world. Customers include the Norwegian Telenor ASA, the British Zen Internet and the Dutch T-Mobile.

For the time being, all telecom providers still have some routers on stock, but the supply of new routers does not look good for at least the next six months. Gewecke, therefore, sees a present chance that stocks will run out at some point. There have already been some close calls.

Routers that were already on their way are not without problems either. Zyxel equipment was also being shipped on the Evergreen, the large container ship that recently got stuck in the Suez Canal, as well as on several ships blocked by the incident.

Shortage due to Covid-19 pandemic

Zyxel’s supply problems are mainly due to the corona pandemic. At the beginning of the pandemic, the company was forced to shut down its factory in the Chinese city of Wuxi for a month. After reopening the factory, Zyxel struggled to get enough parts. Shipping products also suddenly became much more expensive because, at that time, many companies were starting up again at the same time, and medical goods were also being exported in large numbers.

The supply of chipsets in particular struggled to get going again. Many chip factories are now producing at full capacity, but demand is still greater than the factories can supply. This is forcing manufacturers to make choices about which chips to prioritise, and the choice quickly falls on chips with a larger profit margin. This does not include the chips that end up in routers. Especially the cheaper routers that are bought by East European providers are affected by this.

Broadcom did not respond to questions by Bloomberg. However, Hock Tan, the CEO of the company, recently said that 90 percent of its 2021 stock had already been bought. 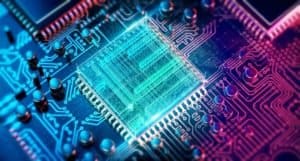 Texas Instruments is worth €150 billion due to global chip shortage