Business intelligence (BI) is a data discipline that is just entering a new phase. At least, that’s the message Qlik’s Elif Tutuk from the Research & Development department conveyed to us in a recent interview. The software supplier is busy preparing for this ‘third generation BI’, as Tutuk describes it, and wants to take a strong position in this.

According to Tutuk, the third generation BI is characterised by a platform that combines business intelligence with extensive analytics capabilities. It is important to provide the user with detailed insights. Ideally, all platforms and data can be used, ‘technology of choice’ should be stimulated, says  Tutuk.

With Qlik, she hopes to play a pioneering role in this. She also refers directly to the takeovers that took place in the BI landscape. Qlik itself was taken over by investment company Thoma Bravo; competitors often came into the hands of tech giants. According to Qlik, Qlik remains independent of other technology, and is doubtful whether this is the case with other players as a result of the takeovers.

However, the fact is that Qlik and its competitors have more often expressed their desire to maintain an independent image and to support third party sources as much as possible. As a result, other IT suppliers often think of Qlik, Tableau, Looker and Power BI when setting up integrations with BI platforms.

Now one of these leading players sees a new generation of business intelligence coming. According to Qlik, the next phase broadly has three characteristics. First of all, the democratisation of data, which means that data becomes an IT component that everyone can work with. This by making it simpler, but also by offering training courses. On the other hand, the BI supplier mentions AI as an important factor that will contribute, although Qlik prefers to talk about augmented intelligence instead of artificial intelligence. The idea of augmented intelligence is not new and boils down to using technology to make people better. Augmented intelligence is, therefore, the philosophy that AI supports people. For BI, this means, among other things, providing new data insights. Finally, Qlik believes that analytics will support every decision a company makes. Every business process should be able to use BI in the future so that the whole process runs more efficiently.

SaaS at the basis

The biggest asset Qlik uses to support this is its Software as a Service (SaaS) offering. Tutuk points out that the SaaS solutions are, from now on, able to deal with Kubernetes and Docker environments. This allows users to install the BI tools on Kubernetes. By using containers, a Qlik version runs on a Kubernetes cluster, making it deployable in public cloud or private cloud environments. With Docker is similar compatibility.

The BI vendor indicates that Docker and Kubernetes are truly core technologies for the future of BI. They can contribute to the scalability and to the multi-cloud approach Qlik believes in. It simply doesn’t matter whether you want to run the BI solutions on-premise or on a cloud platform; the support needs to be as comprehensive as possible.

However, it strikes us that this solid multi-cloud focus has led to the Qlik Sense versions Business and Enterprise seem to get the most attention. These are real SaaS-based products. For Business, for example, new connectors for Salesforce and Snowflake were released at the end of last year, so that the retrieval of data from these environments should be easier. Enterprise, in turn, could count on further support for Microsoft Azure, AWS, Google Cloud and Red Hat OpenShift.

Qlik took over the startup Crunch Data in 2019. With this, it has acquired technology that should give users improved insights. This by means of the AI-bot CrunchBot. Users can ask questions to the bot, after which the bot shows graphs or forecasts, for example. For Qlik, it also means that the natural language processing (NLP) and natural language generation (NLG) specialism has been brought in-house, enabling it to recognise user questions and train itself in them. In this way, it can play a role in conversational analytics, from which a lot is expected. After all, it is assumed that we will talk more with our devices in the future.

In addition, Qlik invested heavily in data management technology so that it can address the analytics stack more broadly. BI alone is no longer enough if you want to simplify the discipline, as obtaining and preparing data can be technically challenging. Data comes from all kinds of sources, where the question is whether the data has the desired quality to draw immediate conclusions from it. Of course, Qlik offers the necessary connectors and management options to retrieve the data.

Expanding data management technology ultimately comes mainly from taking over multiple players. Podium Data is the first player from this corner that was purchased, with which Qlik bought a technology to expand data for customers. Attunity is a more recent acquisition that cost around 560 million dollars. Attunity allows Qlik to set up a real-time data connection by monitoring the original data source. When a change occurs, the data is replicated and submitted to the Qlik solution.

When we ask Tutuk what else Qlik is going to do to take BI even further, she particularly points to the further integration and use of the Attunity technology. The data pipelines should be able to move the data between as many different systems as possible, and a bit of intelligence should be added to that. For extra intelligence, cognitive technology will be used in combination with Attunity’s Change Data Capture software. This will provide users with general data about data changes as well as deep insights into those changes. This in order to be able to zoom in on very specific data, because analytics technology often requires very specific insights and solutions in order to be of real value.

Will BI be more widely embraced?

Ultimately, the developments that take place at Qlik are intended to implement optimizations in as many business processes as possible. The general expectation of the market is also that BI can play an increasing role within the entire organization. From a technological point of view, this is possible by making the software simpler and more widely deployable.

In addition, you can also see that the sector is trying to make the technology understandable for everyone through training courses. Qlik does this by being an active member of the Data Literacy Project community, to which the BI vendor has made dozens of courses available. Many other important parties are also members of this community. 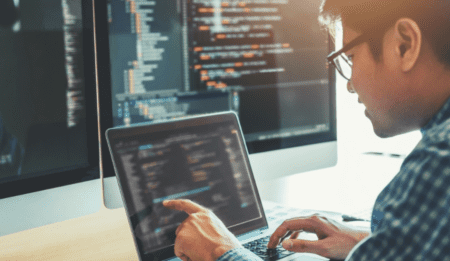