The mainframe computer has been maligned for a long time now. Just mentioning the name evokes images of an ancient relic humming away in some basement. In the IT world, it has become the thing that works the hardest but never gets brought out for the big shows.

When it comes to analytics, the mainframes based on the classic IBM System/360 architecture have been left behind.

A new Israeli startup, Model 9 Software, wants to change that. It has developed and patented technology that makes it possible to save mainframe data to cloud object storage to create data warehouses and data lakes.

Mainframes and modern analytics have never been married, dating back to the earliest days of the 360 platforms, when disk storage wasn’t even a thing.

Back then, tape drives were the cheapest option. As Model 9’s CEO Gil Peleg puts it, the tapes are a serial device that you can only write to once. To this day, modern mainframes still use a tape emulator software to make up for this structural limitation.

Mainframes do not use the concept of a file. Data is organized in records known as data sets that use a protocol called Virtual Storage Access Method, created specifically for rapid sequential access, but not the random methods files and databases use.

Data can be saved on a disk but only serially. This was appropriate back then when computers were purposely programmed to do the same tasks over and over.

Model 9’s software extracts the data and reformats it for storage in the cloud or on-premises object storage. 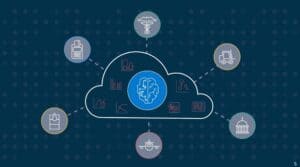