We are still waiting for it: Samsung’s foldable smartphone. The device has been mentioned for about five years now and it’s starting to look like it’s about to be released. DJ Koh, the CEO of Samsung’s mobile branch, states that the device can be used not only as a phone, but also as a tablet.

During an interview with the CNet site, Koh told us that the foldable phone is still in the pipeline. One reason why the device has not yet been placed on the market seems to be its functionality. If the user experience is not yet at a high enough level, I don’t want to release it, says Koh about the product. If we provide a foldable phone, it must be truly meaningful to our customers.

The foldable phone, when fully unfolded, must be usable as a tablet. Then users can multitask on the device that is yet to be launched. Folded up completely, the phone can be used as a smartphone. For example, for browsing or viewing videos or photos, however, it is very convenient to unfold the phone thinks Koh.

If the foldable phone is there, it shouldn’t be a gimmick product that will be taken off the market after six months or so. At the same time, Koh thinks that if it is initially sold, it is particularly suitable for the niche. But: I’m sure it will soon be widely adopted. I’m sure we need a foldable phone.

Samsung has been working on a foldable phone since 2013. This was the first time that a flexible OLED display was shown at the CES in Las Vegas. In recent years there has been regular news about a possible launch, but this has been postponed time and again. The South Korean company would mainly struggle with the user experience and still find it difficult to find a form factor that was really always useful.

But now Samsung seems ready to launch the phone. Koh confirmed in an interview last month that the phone will be released this year. In addition, he stated that this could be at Samsung’s Developer Conference next month. If that’s true, the smartphone industry is finally taking another big step forward, because innovation in the sector has stagnated somewhat.

However, there are hijackers on the coast. The Chinese company Huawei is also about to release its own foldable telephone. Earlier this year, the company ranked Apple number two in the global market and is looking for a way to attract even more attention. Being the first foldable phone on the market can help. For Samsung, it is therefore important to come quickly with his phone. 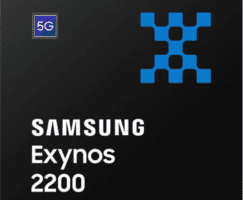 Samsung has started mass production of the Exynos 2200 chip