The list is highly US-centric and is certain to include the likes of Google, Apple and Amazon.

The European Union is once more taking aim at Big Tech in their efforts to rein in the power of giant technology companies. On Monday, sources told the Financial Times that the latest battle will be against an array of 20 tech firms that the EU has targeted for special attention.

The European Commission is drawing up a “hit list” of tech giants to be subjected to tougher rules and increased scrutiny.

Under the proposal, the companies on the list will have to comply with tougher regulation than their smaller competitors. This could include forcing them to share data with their market rivals. There could also be a requirement to be more transparent on how they gather information.

The list will be compiled based on a number of criteria, including market share of revenues and number of users. This means it is almost certain to contain the iconic titans of Silicon Valley such as Amazon, Apple, Facebook and Google.

Any company that is deemed to be so powerful that rivals cannot operate without using their platform will also make the list.

The exact number of companies targeted and the precise criteria for putting them on the list are still being discussed. However, this move is just the latest skirmish in the EU’s battle to limit the power of platforms they perceive as a threat to trade and EU citizens’ rights.

Breakups are still a possibility

Last month, Thierry Breton, the EC’s Commissioner of Internal Market, implied that the tech giants were not unlike the big banks that were “too big to fail” in the global financial crisis of 2008. He also described what the EU’s Digital Services Act (DSA) could hold in store for them.

“There is a feeling from end users of these platforms that they are too big to care,” Breton said. “Under certain conditions we may also have the power to impose structural separation,” he warned.

“The internet as we know it is being destroyed,” another source told the FT. “Big platforms are invasive, they pay little tax and they destroy competition. This is not the internet we wanted.” 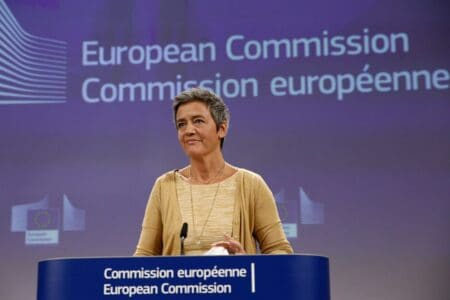